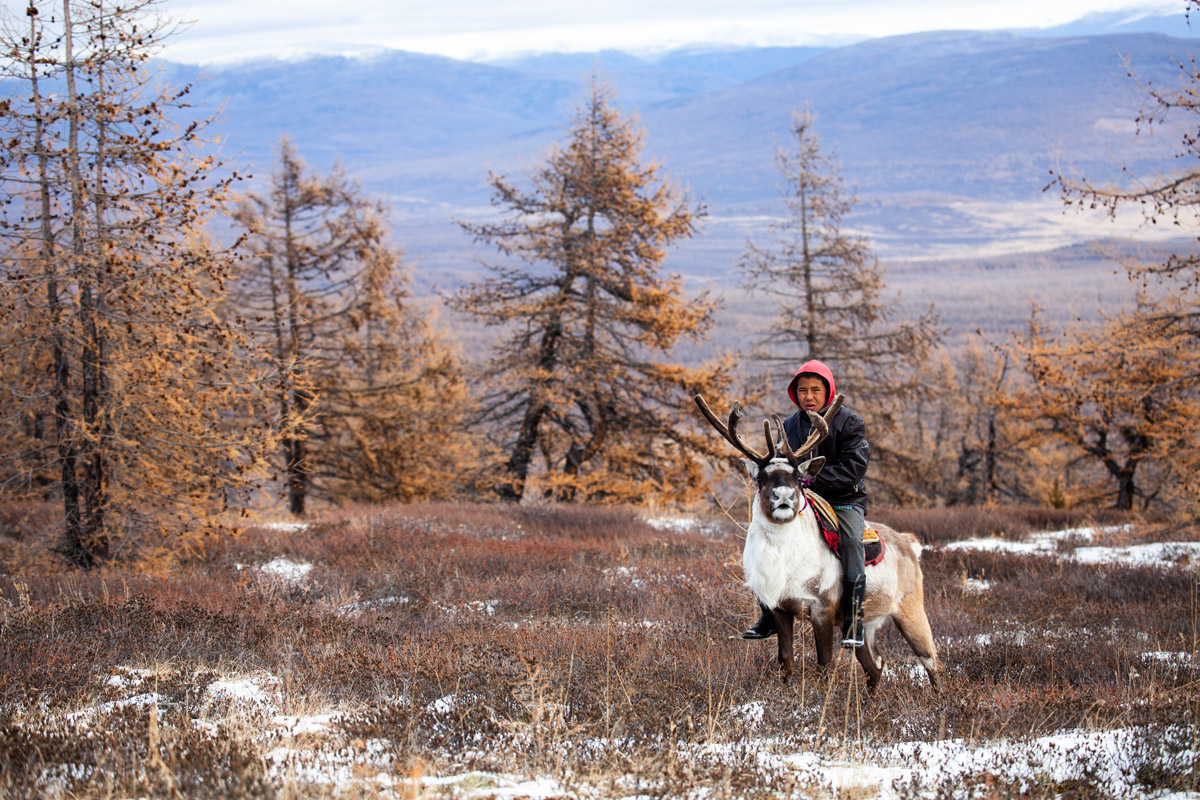 In the land of reindeer

After our first experience in the Altai mountains in the far west of the country, we are back in Ulaan Batar (UB) and ready to start a new Mongolian adventure.

We have a big dilemma: to go to the Gobi Desert in the south, a classic destination in Mongolia, or getting more exotic and visit the north around Lake Khovsgol (the Mongolian little brother of the famous Lake Baikal).

In fact, more than the lake, we were more attracted to the idea of finding the Tsaatans, also known as “the reindeer peoples”, a nomadic group who live exclusively from reindeer herding in this remote part of the country.

As WINTER IS COMING…. we were afraid that, first, we could not get there due to the hard weather conditions and the bad state of the roads, and second, that we could not find the Tsaatans, as they migrate to other distant areas during the winter.

In order to find the answer, we contacted Soko, a highly recommended guide who has her own agency, Mongol Nomads, based in UB. After some calls she assured us that some Tsaatan families are still reachable and also helped us organizing all the logistics to get there. She also contacted Byamba, a really badass driver, and Ulzi, our super guide, to be part of the team.

Ready for the north!

As we told you many times before, Mongolia is big! So, to reach the great north from the capital city it takes at least three days. We departed very early in the morning again with an old school Russian Uaz towards the city of Mörön. Our goal of the day: travel 700km in 12 hours with almost no paved roads.

Once out of UB, we were so happy to reencounter again with the steppes but this time with less mountains and camels but still with lots of horses, yaks, goats, sheep and also more, and more, and more horses (did I say horses before?).

On the way to the north!

Nomads on the way to their winter place

On the way to the north!

And yet, despite few short breaks and a quick picnic at the river, the way felt veeeeery long and the roads are so bad that you can forget about taking a nap, it’s impossible! It really feels like you are doing the Mongol version of Paris-Dakhar. There is nothing you could do but to try to keep your stomach on its place…

It felt great to finally stop for dinner in the small village of Rashaant (Рашаант) where we took spent some time with the local children before having a delicious lamb soup. When we left the restaurant at 8pm, we realized that we would not arrive at   that night. Change of plans: stay overnight at Byamba’s yurt, still located hour and a half away.

Once we arrived to Byamba’s place, his family (his parents, wife and son) warmly welcomed us with the classic milk tea, breads, butter and cheese, and later, after some conversations, we slept all together in the yurt to continue with the road very early on the next day.

It’s very funny because this trip is also our honeymoon, but since we arrived to Mongolia we have continuously shared same rooms with lots of people! Very romantic indeed… But, at the same time, it is very nice to experience the hospitality of Mongol peoples as for them there is no discomfort in sharing their domestic and intimate space with strangers (like us). It is clear that their conception of “privacy” is very different from ours.

Next morning we continued our way but the road and the weather were getting worse. Driving became particularly difficult and in that moment we realized how important is to have an experienced driver when you travel in Mongolia. Byamba is a serious badass pilot! We reached the small village of Ulaan-Uul spending the night in a basic but cozy hostel. And, guess what! We have a private room! What a luxury…

We woke up surrounded by snow, everything looks so beautiful. Lunch in Tsagaannuur, a cute little city at Tsaatan Lake, where after some conversations with locals they gave us some information about where the Tsaatans might be. We also gave a ride to some Tsaatans living in the city to approach them to the forest.

We give a ride to a Tsaatan family

One hour and a half later, after crossing through very muddy roads and being very close to loose our hope we finally saw three riders emerging from the deep forest and… reindeers!!! They were riding reindeers! We will never forget this scene because it felt like we were into a science fiction movie. Are we in Narnia? In the North Pole? Where is Santa? We felt like entering into Christmasland… We were astonished and everything looked so surreal!

The riders opened our way into the forest and guided us to their camp. But this was a camp of teepees… real teepees. And, imagine all the reindeers surrounding us… it is almost impossible to take out the smile from your face. We felt like children in Christmas and run to play with the reindeers. Just watching them in their habitat was something amazing.

We spent the night sleeping at Niergui’s teepee, a Tsaatan young woman who got married one year ago. It was October, fall season, but getting closer to winter and you could feel this in your bones. The fire was weak and as we slept in the floor you could felt the cold coming from the ground. But, with 2 sleeping bags and our excitement we managed to survive the next morning.

So, who are the Tsaatans?

Also called as Dukhas, they are currently about 40 Tuvan families living in the Khovsgol region in northern Mongolia, close to the border with Russia. They are one of the last groups of nomadic reindeer herders in the world. Their sense of community is structured around the reindeer affirming that if someday the reindeer disappear, so too will their culture. They use the reindeer milk for cheese and yogurt and only a few reindeer are slaughtered during the year for meat and pelts. The reindeer also provide transportation.

Tsaatans release their reindeer everyday in the early morning to eat the fresh lichen in the mountains. It is usually the young people who keep them a good part of the day to prevent them from escaping but especially to protect them from the wolves. Women are the ones in charge of milking them.

In the late afternoon, we head to another camp to visit a local shaman to attend a ceremony and we will get there, guess how, riding the reindeer!!! If riding a horse in the Mongolian steppes is already an interesting experience, imagine riding a reindeer… It is something I had never imagine. At the beginning I felt no confidence, especially because my reindeer had big horns and was afraid to loose an eye every time he turned his head. But after some minutes I got used to it and realized that they are very calm animals. It is impressive to see how easily they move on the snow, mud and eve ice and carrying almost 70kg on the back, they move with a kind of lightness.

Have you ever ride a reindeer???

We finally arrived at the second camp (much more basic than the first) and met the local Tsaatan shaman. Tsaatans practice shamanism and believe that their ancestors’ ghosts live on in the forest as animals that give guidance to the living. We had the chance to be part of a 3 hours ceremony where the shaman, embodying her ancestors, replied some of our questions. We did not take photos but you could see how the shaman dressed with a drawing Fiorella made.

We had a tough night sleeping at the shaman’s teepee because we very cold and uncomfortable but you have to take into account that facilities here are very basic and there are no proper beds. But, really, it worths the experience!

Early in the morning we took the reindeer and headed to the first camp to help the family herd the animals. OMG, herding the reindeer was awesome!!! So much fun!! We also rode the reindeer to the top of a mountain and had the most amazing view of the taiga.

After spending some time with our host family, we got ready to our next move in direction to the Khovsgol lake. We wished we had stayed longer but the weather conditions could have made our way back worse as everything was covered in snow.

On the way to Khovsgol lake

We feel very grateful of having the opportunity to find the Tsaatans and to be welcomed in their homes. We will always remember this magical experience where we really felt like kids in Christmas, riding the reindeer, learning about Tsaatan’s culture, their close relationship with nature and how they subsist in such remote areas and under extreme conditions. We are sure we will return someday but this time, for sure, in summer!!!!

Classical Tastan’s teepee (under the snow)

Thanks for your hospitality

Ready for the next adventure!
TAGS
RELATED POSTS