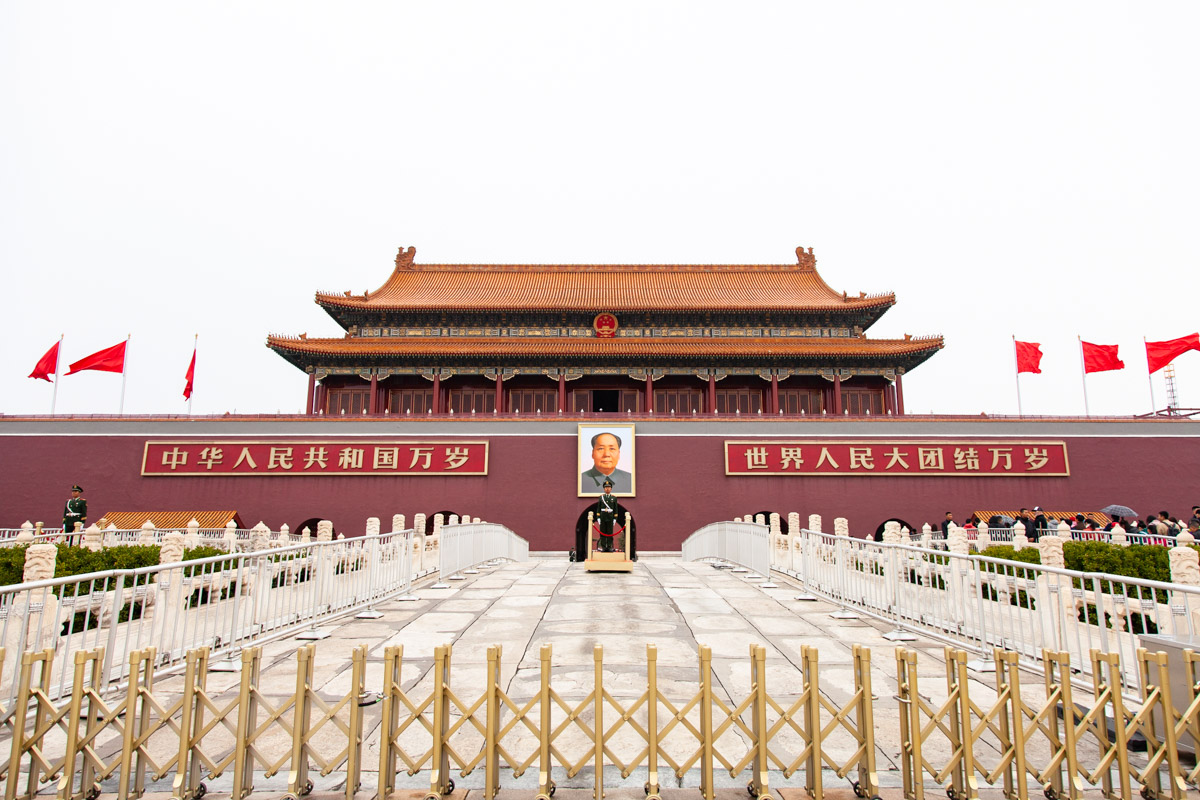 That’s it, after a night aboard the Trans-Mongolian, we arrived in Beijing, the capital of the middle empire (nothing to do with the lord of the rings we agree).

Of course, after spending a little more than a week in the place, we would have thousands of things to say about this mega-city. We visited the Summer Palace, we walked in the Forbidden City, we walked through the hutongs (old neighborhoods of small alleys with traditional houses), we visited the National Art Museum of China (NAMOC), we made a tour at Confucius temple and the temple of lamas, we tried the Peking duck, we went to the peculiar Silihe Market and we even had the luxury of greeting Mao (in his answer in his mausoleum). In conclusion, we did almost everything that should be done, we visited almost the “essentials” of the Chinese capital, but the truth is that we did not love it.

This is totally subjective, because there might be many people who probably love this city.

“Big brother is watching you”

In our defense, we must still specify some small specificities of the city … To start, in Beijing, you don’t see the sun (the air is too polluted), 1984 Orwell seems like a fairy tale because of so much controls and cameras, the crowd is so ubiquitous that it becomes oppressive, the Pekingese (like the Chinese in general) are so much the nose stuck to their cell phone that one feels to be in the middle of lobotomized zombies and to top it off, the concept of living space is a concept absolutely … how to say … doesn’t exist!!!

But beyond all that, and despite the fact that we ate very well (a crucial point if any), I think we had a little trouble managing the contrast with the magical month that we had just passed through Mongolia.

It was a shock to arrive from Mongolia, one of the world’s least crowded countries to the country with the largest population in the world. Also, as travelers and in a country that is so culturally different, we felt a lot of indifference from the people as mostly people were not willing to help us when we need it, neither answering our questions and sometimes avoiding us. In general, we do not feel very welcome but we recognize that we are also biased by the warm treatment of the Mongols, which makes us perceive the Chinese as less welcoming. We repeat: this was our experience but maybe for you it could be different.

But there are good things too: the monuments and buildings that date back to the time of the empire are really impressive, as well as the temples that are in perfect condition.  Getting lost in the hutongs is also fun because you can see how local people live. I wondered why sometimes I saw people walking down the street in their pijamas … and it’s because the small houses in the hutongs do not have their own toilets, therefore the inhabitants must go to the nearest public bathroom (that’s why there are always public toilets everywhere!).

Another positive thing is that we always feel safe no matter where we walk in the middle of the night. The very clean streets. Drinking tea, of course, a ritual that you have to experience. But the most interesting thing is that Beijing is the perfect example of how tradition and modernity coexist. It is a city that reflects how this monster country aims to rapidly modernize but, in some way, preserving its culture and its tradition. and, a little in spite of ourselves, we have remained quite hermetic to the frenzy of this city.

What to do in Beijing: