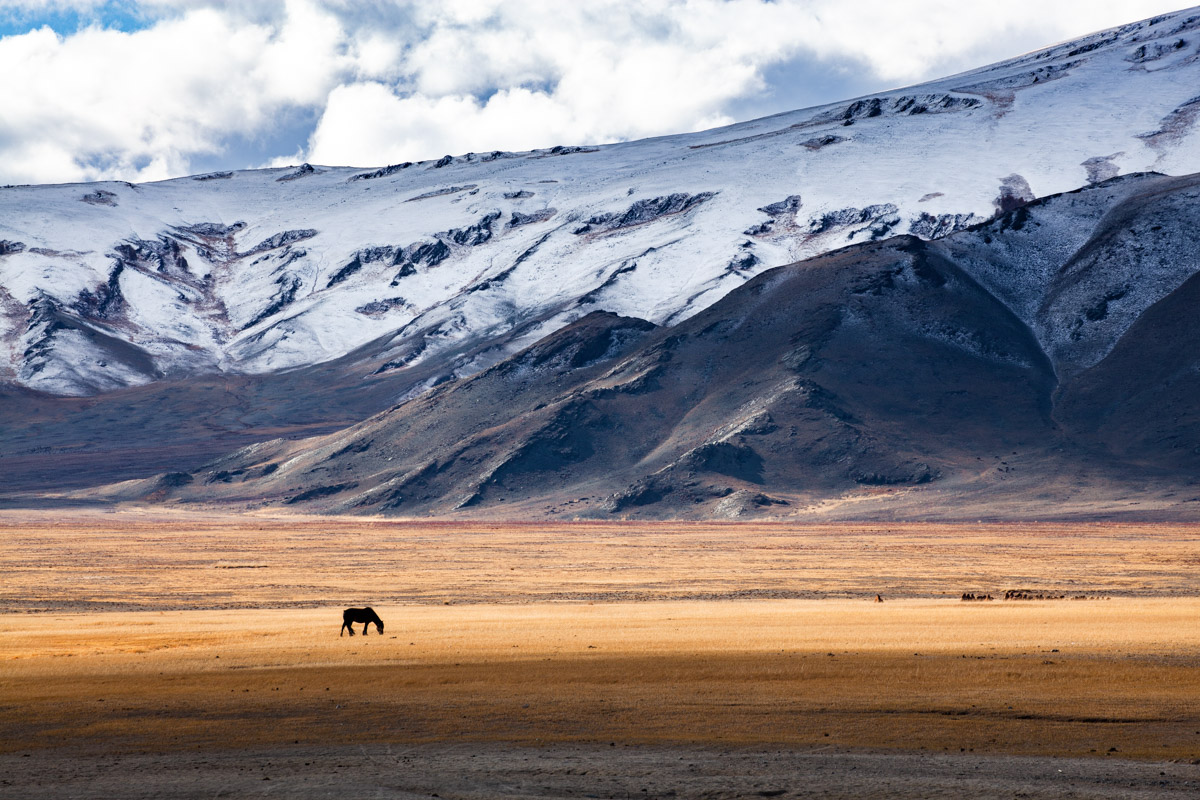 By
La llama
on

This was our first expedition in our trip around Asia. We departed from Ulaanbaatar, the capital city, on a local flight to the city of Ölgii in the province of Bayan-Ölgii, a region where the majority of the population is Kazakh, the second largest ethnic group in Mongolia. As soon as we arrived we met our friend Taskhyn, a young guide who is starting his own agency and who helped us to organize the logistics for our trip.

In the countryside of Mongolia there are no road which makes it very easy to get lost in the middle of nowhere. That’s why it’s necessary to have a local driver and a 4×4 car. An other option would be to rent or buy horses (actually, it’s cheaper to buy them than to rent them), but to do that kind of adventure you definitely need more time. We actually met Dani, a Spanish traveller, and also Jessy, a English girl, who had done this and sound as an amazing experience! We took the first option and enjoyed a classic “Uaz“, a kind of 60`s Russian van capable to overpass any type of terrain, climbing mountains, crossing rivers, ice, mud and snow, but be prepared for a non-stop bouncing trip (better if you skip breakfast!!!). To our surprise, in addition to the driver and a local guide/translator, we were surprised to have Janka, a Kazakh lady as part of the team. She was in charge of feeding us during the whole trip, cooking delicious local food (best thing could ever happen to us!).

Need a truck to move? This truck can take your TV, your furniture, your sheep and even a whole ger including your entire family! This is how some nomads move with all their belongings when winter is coming.

It is just a little storm coming…

Yes, there are also camels in Mongolia.

We spent the first part of the trip at the foot of the snow-covered mountains of the Altai mountain range in the Tavan Bogd National Park, 6 hours away (bouncing) from Ölgii. We stayed in a very nice and big ger (or yurt, as it is called in the West) with a Tuvan family, (another of the 20 ethnic groups in Mongolia). The family received us with the classic salty milk tea, yogurt, tones of butter, small kind of stone cheeses (people who are lactose intolerant: take your pills!) and a couple of colourful “del” (traditional coat) to resist the cold weather. Our first night we had an amazing sky full of stars and romantically slept all together on the floor (me, with 2 camel skin sleeping bags to resist the cold). The next morning we grabbed the horses to explore the mountains and the Potanine glacier, a 12 km long glacier that limits with the frontiers between Russia, Mongolia and China.

What a view.. Definitely one of my favorite moments!

Chilling around the Potanine glacier

On the next morning, we woke up and everything was totally white… it had snowed all night long. We now understand why the goaty were trying to enter inside the ger all the night, they were frozen. There is not doubt that… Winter is coming!

The first snow of the season

The cattle and the yak chilling on the snow

Perfect for low temperatures, we were lucky to have a pair of very colourful traditional “dels” to wear.

The next few days we moved south, saw some petroglyphs and stone sculptures from 3,500 BC. It’s crazy that these monuments, although so ancient, do not have any kind of protection. We also visited a very beautiful forest with waterfalls in the Turgen mountain range where we got lost for a while.

Petroglyphs of forts men riding horses, dated from 3,500 BC

Petroglyphs dated from 3,500 BC

Yes, camels can also be in the snow.

You could see a lot of squirrels everywhere!

The ger and the yak

A kazakh kid walking along the steppes with her family

Near the forest (and after 3 hours bouncing in the Uaz…), we stayed in the little winter house of Tanggul, Janka`s sister, and together with 7 people we slept tight but warm after eating “5 fingers” – a local meal made of meat, potatoes, onions and wantans that Janka prepared for us- and several shots of vodka. For people in the countryside of Mongolia, receiving people at their homes (even strangers) is something normal. As nomads it’s a strategy for survival and and also a good opportunity to socialize with others, as they are constantly moving to search good pastures for the cattle.

This is how nomads families always received us 😛

This was our sky view every night…

In our way back to Olgii, we also went through Tsengel, a small village where some Khoomii singers (or throat singers) live. We had the chance to stop and met one of them, it was really amazing! (check the post we made about them!). After stopping in Ölgii to finally have a shower in a kind of ex-communist sauna facility and attending to the Festival of Golden Eagle Hunters, we headed south to stay with an eagle hunter family. They were very nice hosts who killed a sheep to prepared us a welcome feast in which we had to eat even the brain of the animals (vegetarians: think twice before coming to Mongolia!).

Herding the cattle with a horse was not easy, but Alban really enjoyed it!

I could feel the sound of silence

Esentay, our host, showing us how to hunt with an eagle

On the way for new adventures

During our stay they taught to shepherd the animals while riding the horse and took us to the mountains to show us how they hunted with the eagle. Alban experienced the strength of the eagle by landing on his arm while I could only keep the eagle few minutes on my arm, because it was really heavy.

If you come to Mongolia we definitely recommend coming to this area not only for the beautiful and impressive landscapes of the Altai mountain range, vast steppes, forests, lakes and mountains, but also to experience the cultural diversity of the country by learning how people from different ethnic groups (such as the Kazakhs and the Tuvans) live with their traditions, lifestyle and customs… an incredible experience!