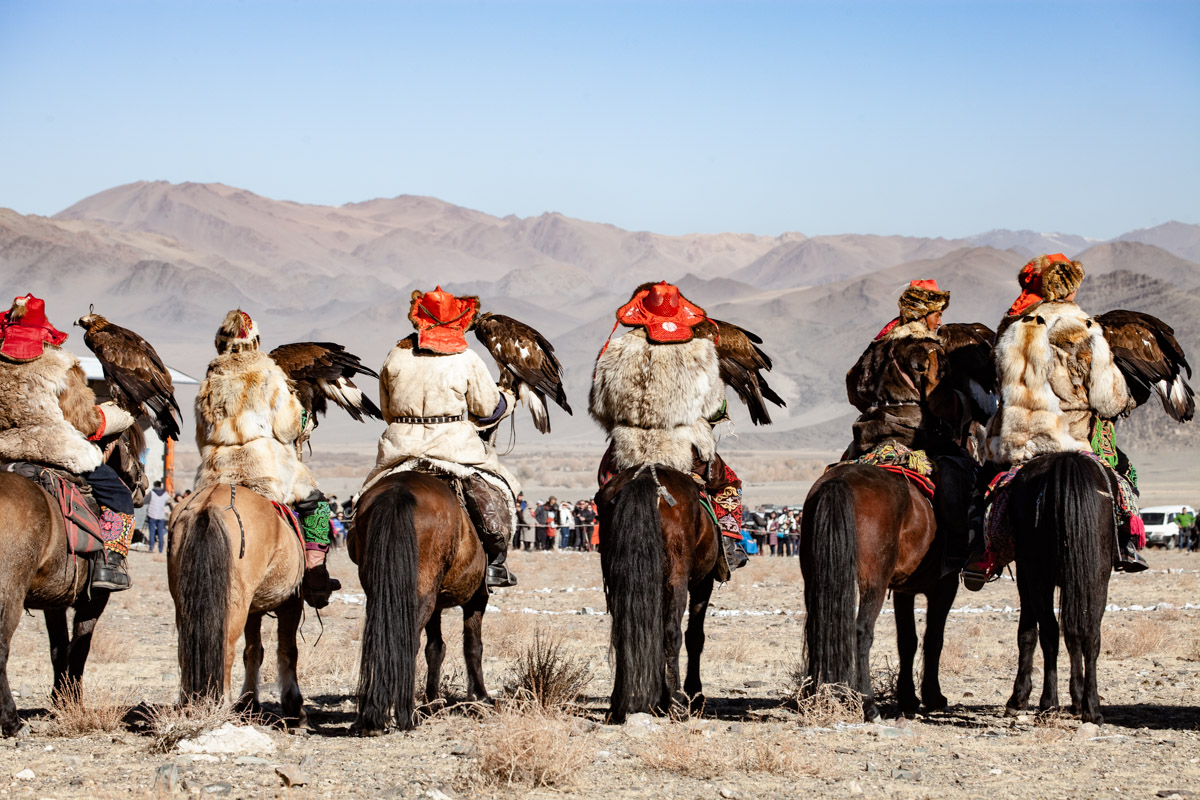 Few months ago, one of those grey days during the winter in Lima, where the only thing you want to do is to stay home watching movies, eating chocolate and covered with at least 5 blankets, we came across (among the 465 suggestions options that Netflix suggests) with the documentary film “The Eagle Huntress”.

– Do you want to see it?
– What is it about?
– It looks like a documentary about a girl who raises an eagle
– Mmm… maybe.
– It could be nice, it’s in Mongolia
-Oh, Mongolia!
– Sounds good. Let’s watch it!

Aisholpan, a Kazakh girl from the Altai region in Mongolia, has a dream: to become an eagle huntress. For generations, the men in her family have follow this tradition been eagle she wants to follow their steps. But wait, eagle hunter? it’s only for men! Holly mother of god!!!

Would Aisholpan, with the help of her father, achieve her dream to become a female eagle hunter and participate in annual Golden Eagles Festival? To be continued…

A little dramatic but despite the polemics that surrounded its release, the film does provide a good overview of this ancestral tradition and especially shows the beauty of Mongolia’s landscapes. Mongolia was a “must” in our trip, so curiously, we checked the dates of this year’s festival and…. voilà! Here we are, in the 19TH edition of the Golden Eagle Festival.

Let me explain you what’s about. The festival is a kind of 2-day championship (outside Olgii city) where local Kazakhs encounter to compete in their traditional games. It started in 1999 to promote and preserve Kazakh traditions in the region and the highlight is, of course, the competition of eagle hunters, when Kazakh hunters (or locally called as Burkitshi) have to demonstrate the skills.

Presentation of all the participants

The hunter chooses a “landing zone” that the eagle, located on top of a nearby hill, must arrive after the hunter’s call. The number of points scored depends on the distance and velocity used by the eagle to arrive to his owner.

The hunter is calling is eagle with a piece of meat

The eagle is suppose to recognize hjs voice

All the hunters put on their traditional hunt costumes

The eagle has to join his master

It’s a race but …with camels! It’s a bit of a mess (the camels are not super disciplined) but it’s pretty funny to see.

They do their best to control the beast… not easy

A woman and a man are horse racing. The man wants to chase the woman but whenever he approaches the woman moves him away hitting him with a whip. Romantic, no?

A woman and a man are horse racing

The woman, with a whip try to hit him

They finish together, with a big family 😉

No targets but a kind of wicker balls placed on the ground that archers must reach from different distances.

Horse riders have to catch as quickly as possible several objects (traditionally coins) that are placed on the floor.

Horse riders have to catch several objects on the floor

They need to be fast

The judge is timing

The hunter (on his horse) drags a fox skin that the eagle, who is on the top of a hill, must catch when the hunter calls him. The precision, velocity and the time-reaction of the eagle are evaluated.

The hunter (on his horse) drags a fox skin

The eagle is flying from the top of the hill…

… and grab the fox skin

Traditional game of Central Asia, a sort of polo but instead of a ball they use a sheep carcass hat must be brought into a specific area of the field to score a “goal”. In the case of the festival, it is a simplified version with only two riders, so the one who manages to tear the carcass, wins the game. So just imagine how the sheep ends…

… a sort of polo but instead of a ball they use a sheep carcass.

the one who manages to tear the carcass, wins the game

They need to control their horses…

… and not to fall

You can imagine how the sheep ends!

So, at the end, what did we think about this festival?

Between tradition and modernity

Obviously, it does give a good overview of the Kazakh customs of this part of Mongolia, as it is evidenced that traditional games are still practiced and valued by the local population. It also attracts eagle hunters who come from all over the region to showcase their experience and to, maybe, have the chance to return back home with a precious trophy (and some money, of course).

But we had the impression that the festival itself has turned a little into a touristic show. Some locals confessed that it has lost its original spirit which was an opportunity to reencounter and share with other eagle hunters, and where the winner was rather appointed by mutual agreement according to the group consensus. Unfortunately, nowadays, the competition has become much fiercer and the event more commercial, loosing its essence.

Can you get closer??

Also, the very photogenic aspect of the event (the venue, the animals, the colours, the costumes…), undoubtedly attracts a lot of photographers or tourists who are desperate to have the best shot, but many of them behave in a very invasive and disrespectful manner stalking the competitors.

Another important aspect is respect for the animals: hunters raise the eagles since they are only a few weeks born until they are 5 years old to release them back to nature (eagles could live between 20 and 35 years in the wild). But unfortunately, several sources have told us that few hunters respect this period of time mostly because of the time-effort invested in breeding them but also because of the complicity between the hunter and the eagle, which may encourage them to keep it much longer. Fortunately, the hunters we met showed a real respect and took a lot of care of their eagles, considering them as their hunting partners.

In conclusion, we had a mixed emotions regarding the festival. Of course it’s a very good opportunity to have an overview of Kazakh traditions, but some tourists could make you feel uncomfortable. Ok… we’re all tourist but we think it’s important not to turn into an obsessed-stalker-disrespectful one.

Bonus track… behind the scene!!

Can you et closer??

When Aisholpan appears… the rush!

She doesn’t seem very happy to such attention

What is that (was thinking this little kid)???

A specimen (very strange one)

Why you look at me??

In the handycraft market

Preparing lunch in the car

Best spot ever no?

“They are humans kid, don’t try to understand…”